Cultural Circle of Crosano and citizens' group 'I matti della Sorna' of Brentonico
There is no address or telephone number. Please refer to the author

What is Sorna Canyon 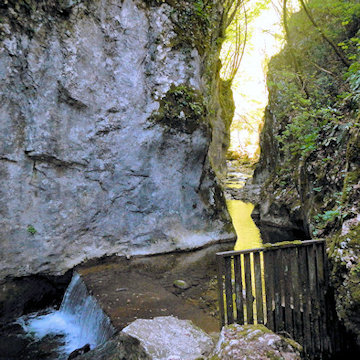 'La Briglia' is the gateway into the Sorna canyon

Along the valley of Sorne there were many other 'productive activities'. In 1850 there were 17 factories used for mills, ironworks and sawmills being driven by energy supplied free of charge from the torrent. Of course there was a network of mule tracks of access to facilitate the production. What remains of it today ... Nothing! Here, it seems like in the "day after". The forest has invaded the fields, the roads, the paths. The only traces of humans that you will find are those of a few old fishermen; otherwise only prints of animals. It is only a hypothesis, bibliography and archaeological research is non-existent and perhaps it would be worthwhile to do some research. Some old men are telling that in 1800 strands of gold had been found in the torrent Sorna. Thus the peasants quit working on the fields and rushed to seek the precious metal. In 1897 the race for gold of Sorne finished due to little success. The farmes went back to cultivate their fields and gardens as well as to plant lush fruit and vegetables on the riverbanks of torrent Sorna and Lake Garda. 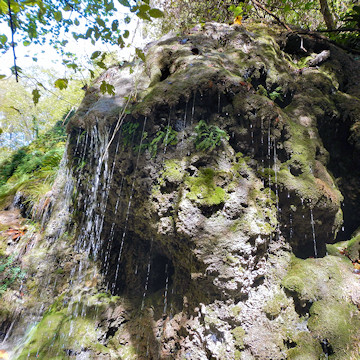 Have you ever seen a spring of water gushing out of a rock? In the Sorna Canyon there is also this magic.

Iron mines or coal? Everyone in the village of Corne' near Lake Garda Dolomites knows that after WW II there have been active mines to extract coal. Some say that in the Middle Ages iron had been mined there. The coal used to be carried up into the valley of chestnut trees on the back of mules. There are still visible traces of a muletrail. Visiting the mines there are evident veins of ferrite; my opinion is that these mines have provided the raw material for the construction of tools of hunters who had visitited the valleys of Trentino in the Neolithic era after the last glaciation. Over the past ten years, a group of mountain- and nature-loving citizens of Brentonico known as 'I matti della Sorna' has been formed. These people have, laboriously and at their own expense, renewed the ancient paths and mapped out our canyontrek. 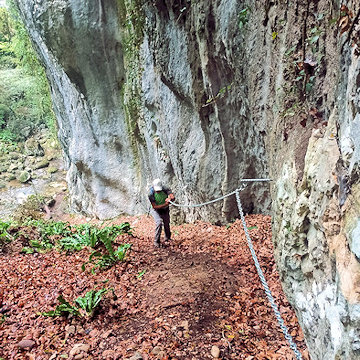 Leave the car at the first hairpin bend on the road from Molini to Cazzano. Take a country road at the second hairpin bend, which you follow as far as the Briglia della canaletta (photo) in ca. 20 minutes. The first difficulty is fording the stream: it can be done on the bridleway where the water is low (5-10 cm) or further downstream on large boulders. Here there is a gorge to the right, while to the left a steep slope rises, which we follow for about 40 m, climbing into the canal with the help of a chain, leaving to the right on a track. When you reach a knoll, follow the path slightly uphill to the left for about 200 m until you reach a sign. Take a track and follow it up the orographic right-hand side until you see a rock wall on the other side of the stream. As soon as possible, ford the stream and follow the orographic left until a chain that facilitates traverse climbing on the rock above the stream. Immediately after the chain ford the stream again and ascend the opposite slope to a track that follows the orographic right for about 300 m. up to a third chain that facilitates the route in the case of a wet path. Take a well-marked path that leads after 400 m. to the right an ancient fishermen's passage over large boulders. 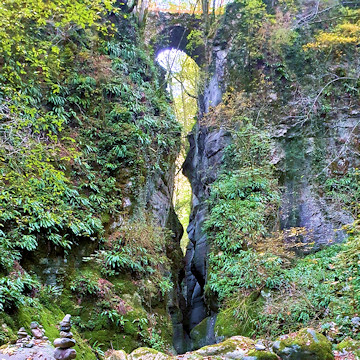 The 'Pont del diaol' the most famous and popular site in the Sorna Canyon.

A short flat path leads to the Sorna Mines. Cross the stream over the evident new steel bridge built by the Autonomous Province of Trento (Not worth taking a photo). From here to Pont del diaol the path is evident and well marked. Immediately after the bridge, take a path to the left that follows the edge of an overhang and descends into the stream bed where you can photograph the impressive Pont del diaol from below. At the junction with the Lodron torrent, it is possible to visit the characteristic Busoni area via a further ford. Remaining on the Sorna stream, follow the orographic left-hand side, without a path, for about 200 m. until reaching Pont dei Tani. Cross the bridge and walk up the road to a crossroad. Take the road to the right and you will come to a convenient ford. Walk across the overhanging meadow to the left until the sign indicating the Sorna path. Continue straight on, following a path and finally a plastic tube, when the vegetation seems to obstruct the passage, follow the trail until you reach a road. You reach the road that descends from Cazzano to Col de lana, which you climb up for a few metres. When you see a dry-stone wall on the left, follow it until you come to an apple orchard, keep to the left and you will come to an uninhabited house. 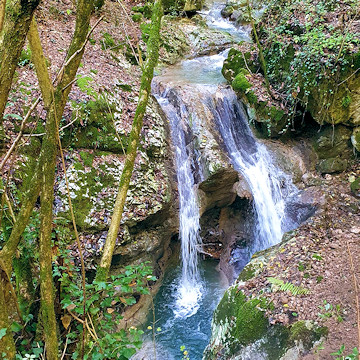 Follow the whole field, and when you come to a sign (cairn), descend into the stream bed and continue along the track to the road that descends from Cazzano. Here begins a complicated section that we traced in summer 2021, following an ancient fishermen's trail. Follow the orographic left of the stream faithfully until you reach a wooden ladder and continue along the path horizontally, facilitated by a chain, until you reach a convenient rock platform. Follow the track on the orographic left, here you can admire two beautiful waterfalls, until you shortly reach the road leading to Pont dei Stefenoni. Fifty meters downstream from the bridge you can see the remains of an old mill. Cross the bridge and immediately take a new path to the right that we recently marked (2022) and leads after 200 meters to Pont dei Bona. Crossing the bridge, an ancient path starts to the left of the ruined house that follows the bed of the Rio Fontechel. The path has been used for centuries by the inhabitants of Cornè to reach the main town Brentonico. Recently the landowner installed a gate that says no trespassing (the property is sacred!).This situation forced us to build a new route, still following the Sorna stream bed. This involved a great deal of work to install chains and brackets in order to make the trekking safe. It is only 650 meters of path but in a wild and also quite difficult environment. The description of this trekking that we have named 'Senter dei Pignari' can be found at the following link in pdf (for now only in Italian).
See: https://www.alpintrek.com/sentieri-del-monte-baldo-trentino/pignari.pdf

We often receive some criticism regarding the fords that characterise our routes in the riverbed of the torrent Sorna. It should be pointed out that one cannot always follow a path on a single bank of the torrent, sometimes one finds oneself in front of a rock or an inaccessible slope and it is therefore necessary to pass on the opposite bank. The fishermen cross quietly walking in the water but are equipped with boots, in our our case inadvisable because they are uncomfortable for walking in the dry afterwards, especially in the summer heat. There are excellent overshoes waterproof overboots exist at low cost (20 Euro) but the grip of the sole is questionable and they also impose two stops at every crossing. 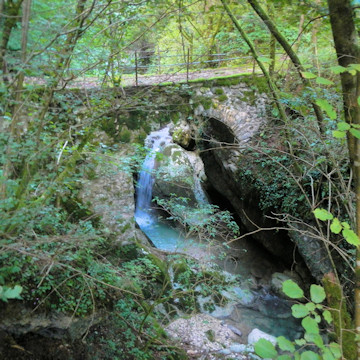 The Pont dei Stefenoni is one of the most interesting and scenic environments in the Sorna riverbed.

So what is the ideal footwear? Certainly not the trainers (elegant sneakers) we have seen worn by some adventurous citizens. In the Sorna, the following are absolutely necessary high trekking boots with goretex interlining and Vibram sole, exactly like the footwear for the mountain footwear. As far as technique is concerned, we can guarantee that under the surface of the water, in practice at the bottom of the stream there is more grip. On the stones outside the stream, a layer of moss forms, sometimes invisible and very slippery. If you have to put your foot on a boulder it is best to rub it with the sole and then load the weight vertically, for which poles are almost indispensable. In conclusion, we would like to point out that we have classified some trekking with the EE (experienced hiker) mark, which means that these trails are intended for people with previous experience in the mountains and a fair degree of balance. The group of citizens called 'I matti della Sorna' (The Sorna Fools) worked hard to make the trek as safe as possible. Bear in mind that Monte Baldo is still a mountain and, as with all hikes in an alpine environment, absolute safety is not possible. 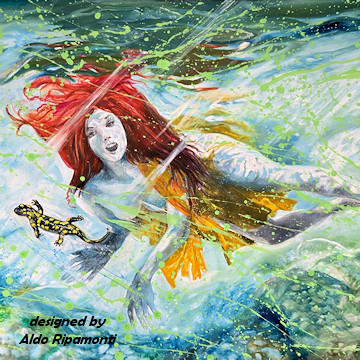 Have you finished your canyontrek in the Sorna stream, have you encountered the Anuane? Too bad, you didn't see them, but don't be afraid to return home, the Sorna fairies have left you so much peace and serenity anyway.